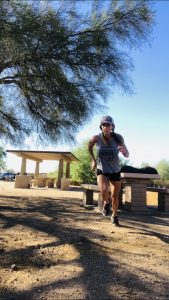 I have this iteration of my life where I write and speak like David Sedaris — but only in my voice. I think this is not such an outrageous fantasy because David shares the same penchant for imagining fame and notoriety as I do. Until I started listening to him, I didn’t know this was a thing.

For example, as I write this, I’m running on a favorite trail where someone passes whose best friend is a famous photographer and she can’t help but notice this specimen of an athlete sprinting down the hill as if she were prancing on icicles; her feminine musculature like Rodin would have sculpted had he made a woman Thinker. By the time this photographer’s best friend runs to her car I’m gone. In the following days and weeks they perch at the trailhead with a detailed description of me like someone would recite for a lost dog. “She ran away during 4th of July… or the mask-wearing era. Have you see her?” And some people will recognize me, and some people will not.

Eventually I’ll show up for another run, and with enthusiastic whispers everyone on the trail mouths “That’s her!” They point and stare- for at least a mile- until finally someone, probably a young child or a teenage girl bravely approaches “that photographer over there has been looking for you. You’re super cool!”

From then on, I’m the life of the party. People like me not just because I can do pull ups, but because I’m capable of compassion and generosity just like they are. After that, people see that I’m fun and nice and they like being my friend.