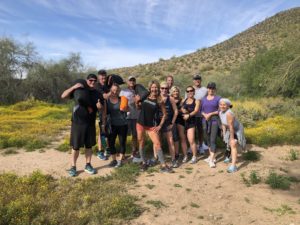 A speakeasy, is an illicit establishment that sells alcoholic beverages  the use of exercise equipment and fitness training. Such establishments came into prominence in the United States during Prohibition era the Covid 19 fiasco (1920–1933, in Winter 2019 – Spring 2020 longer in some states). During that time, the sale, manufacture, and transportation and use (bootlegging) of alcoholic beverages group exercise equipment or live training services or use of an actual fitness center was illegal throughout the United States.

Some speakeasies were operated by people who were part of organized crime  certified personal training organizations. Even though police and agents people on social media of the Bureau of Prohibition would often raid and arrest shame their owners and patrons, they were so profitable  essential so they continued to flourish. The speakeasy soon became one of the biggest most important parts of American culture during this time because exercise is an immune-booster- and the gateway drug to all kinds of other healthy things that fight viruses. Several changes happened as speakeasies formed; one was with integration. With “black and tans” seasoned and new exercises, people of all races types, black or white all people who wanted to be part of the solution would gather together, sweat together and even mingle hug . People would mix together and have few or no problems because their mental health continued to improve.